At first I thought I had heard her wrong. Heir land. My thoughts lingered on that phrase, but Cousin Hattie's words continued on as though they were far away...hearing, yet not hearing.

Suddenly, it was as though my mind caught up with those words...
"What was that? I'm sorry, I didn't quite hear that."

"I said, I've been paying the taxes on the family land for quite some years now. And on the home place, too."

"But I thought Bert's granddaughter was paying the taxes on that..."

"Where'd you hear that," she snapped. "I've been paying on the home place. No one else." 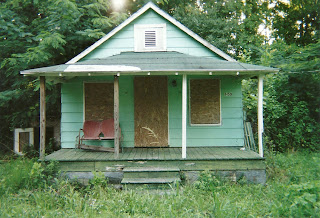 "You mean the aqua house on Blades Road? Where Hezekiah and Hannah lived?"

"I read on the Craven County GIS site that..."

"You know, it's a shame. Your Uncle Bert had tried to claim all the family land. We didn't know where Chester was living. We had tried to look for him, and I was determined that he would not lose his inheritance because of his half-brother. You know they had different mothers."

"That's right. And Bert had always treated him badly.... Well, now. Like I said, you get all the siblings to come to the reunion and I will show you the land deeds. You know I'm having a house built right next to Mattie's trailer where you saw us last reunion. All my things are in boxes, but we'll find them. And there's still so many things up in Yonkers. There's a painting I had done of our family tree. It's beautiful! I want to make copies of the family papers. We'll do it!"

"Okay, Cousin Hattie. I'll get in touch with Cedric's brothers and sister, and I'll see if we can't get everybody together."

What a daunting task! Being an only child, I've never quite understood the whole sibling bond thing....how people raised in the same home with the same parents can turn out to be so different. Temperaments may clash, yet they love each other just the same.

I decided to write a family email and send it to each of the siblings, and to my husband as well.

Word Count: 392
Posted by In Black and White: Cross-Cultural Genealogy at 5:24 PM

In Black and White: Cross-Cultural Genealogy