The Family History Writing Challenge-Day 8-As the Reunion Approaches

It is amazing how during the sabbatical year, even up to six or five months before a reunion, family history research takes on a more leisurely, methodical approach.  Then, suddenly, March first arrives and the research requests start to trickle in...then building up momentum...until the final crescendo of frenzied cries for help to gather as many details for the reunion booklet as possible. Each year the volumes of binders and loose papers multiply exponentially until the day the booklet goes to press.

2009 starts with requests for the co-historian's family, beginning with her grandmother, Sarah Jane (Moore) Moore's four babies who died young. From Moore to Harkley and Hardesty...

On the 18th, a request for Cousin Hattie's address...no longer in Yonkers, NY...she has returned to the home place. 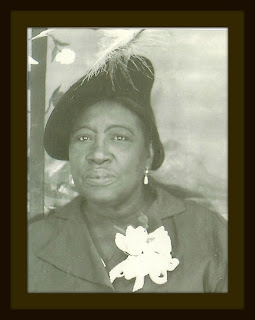 Interwoven between family history requests is a conversation between myself and another cousin. He is a young and tenacious researcher, whose father introduced us one night on the telephone because of a connection to our Hyman family. My husband's grandmother, Hannah Jane (Hyman) Carter, is the only ancestor for whom we have a photograph.

This is another reason Cousin Hattie is so adamant about meeting with the children of Chester Carter, Sr. Within the walls of the home place, once designated as Bert Carter Heirs land (the oldest son of their father by his first marriage). lies the answers to unsolved family mysteries, the truth about family legends, and the artifacts and pictures of those who predeceased us.

In all, Hezekiah Carter had six surviving children...three by his first wife, Stella, and three by his second wife Hannah Jane, pictured above. While Hezekiah's father, Isaac, died intestate, he had divided his land among his children while he was still living. Hezekiah, though, died intestate...without a will. And according to the family stories, the oldest son, Bert, tried to claim all the land for himself.

The home place sat on a parcel of land 5.34 acres. The deed for the family land across the street where the original two-story house sat before it burned down around 1920 was not in Hezekiah's name, however. It was in his mother's name, for she had inherited it from her father, Theophilus George. To this day it is still designated as Martha Ann Carter Heirs land (17.4 acres). And this is the property that straddles both sides of Blades Road.

As Letitia fires research requests to me on a near daily basis during this period, she tells me that in speaking with a cousin, they reveal that Bert's oldest daughter, Eleanor, did not die within the past six months as Cousin Hattie recollects, but over a year ago. Hattie had believed that Eleanor was in possession of the key to the home place. She had tried to contact her, but with her failing health, Eleanor died before Hattie could speak with her.

My membership to Ancestry.com had run out in October, so I began taking the bus downtown to Pack Memorial Library every chance I could get to use the computer in the North Carolina Room. I would take print-outs of the emails, make notations on them, and then print the requested information to send to the co-historian. But by November, my bus route was eliminated due to a lack of funding and ridership. On my days off from work, I would ask my husband to drop me off on his way to work, and then pick me up on his way home.

Much of the assignments I received seem to be the descendants of Thomas Moore, our cousin's own family branch...birth certificates, death certificates, marriages, census documents showing the names and reported ages of children. By the end of March I was working on the descendants of James Bland George...also part of the co-historian's branch....then the Godette and Bell families.

April brought research on Hoyts, Bectons, Harkleys and Richards. I was gathering so much information so quickly that my binders used for those surnames related to my husband's family connections became overfilled, and piles of sorted loose papers sat stacked about my desk. On April 10th Letitia writes:

By May we were working on editing the family history pages for the reunion booklet, based on the descendants of the George ancestors recorded in the first reunion booklet in 1989: Emanuel, James Bland, Nathaniel, Martha Ann, and Nancy. At this time, more of my husband's close ancestors' descendants were added or corrected.

On May 13th I emailed Letitia:


You're gonna laugh when you hear this one! I actually have filled a 2-inch binder with Godette information for the first two pages of the To Do List. Then I got to the bottom of page 2..."this is for the future." You should've heard me laugh!!! I got most of the info requested in 2 DAYS!!!....


She replied the very next day:


Debra: Ha! Ha! Ha! Ha! Ha! You were right~I was Laughing Out Loud. That was a good one. Perhaps I should have put the note at the top of the email. Oh well~the best part is you found the information we needed....

The end of May brought the request for help on double cousins. Then, in the beginning of June, all the reunion committee members' contact information was released. Requests for specific pages of the reunion journal were announced, and I began to look for a poem which expressed the heart of family reunion.

On June 1st, the reunion announcement letter was printed and released to the family. Still, the research continued through mid-June. And then, on June 14th, a request for the committee to vote on the ancestor who died the previous year for whom the reunion would be dedicated. There was a choice between two family members, and the one selected had been a member of the first reunion committee, and had served with Cousin Hattie.


James Modica George, Jr. was one of the pioneers who spearheaded the George Family Reunion. In addition, he assisted in the original genealogy research of the George family descendants and provided the first George Family History Report.

In one month we would be traveling across the state to Havelock, North Carolina for the long awaited George Family Reunion.  While Cedric and I were excited about meeting with the family, we were especially hopeful to meet with Cousin Hattie at her new home.

Word Count: 1107
Posted by In Black and White: Cross-Cultural Genealogy at 7:27 PM

In Black and White: Cross-Cultural Genealogy